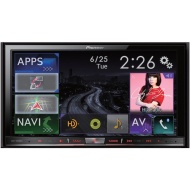 Though announced way back in March 2014, Apple's CarPlay software has remained elusive. With the exception of the Ferrari FF, the partnered automakers are still in the "coming soon" phase of their rollouts, and the aftermarket has remained mostly silent.

The AVIC 8000NEX takes an "everything but the kitchen sink" approach to infotainment, supporting CarPlay, Pioneer App Mode and Mirrorlink smartphone mirroring technologies. The onboard navigation software is smartly designed and performs well. The list...

For some users, the 8000NEX may be too much receiver, making the lower-tier NEX models a better fit for their needs and their wallets.

Pioneer's flagship AVIC 8000NEX boasts dozens of media and navigation options -- including the first aftermarket appearance of Apple CarPlay -- but most users will find a better feature-to-cost balance lower in the brand's NEX lineup.