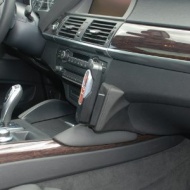 The 2010 BMW X6 M corners like cars half its size and hits 60 mph in less than 4.5 seconds. The navigation system has nicely textured topographical maps and finds routes around bad traffic.

At below 17 mpg, fuel economy is terrible in the X6 M. The vehicle's design isn't terribly practical, combining the ungainliness of an SUV with the tight interior of a coupe.

While impressive in its speed, handling, and cabin tech, the 2010 BMW X6 M is an expensive and impractical car, with all the weight of an SUV, but little of the interior space.

Fuel economy is poor, and isn't made up for with massive acceleration. The iDrive interface remains a problem, and the car is very pricey.

The design of the 2008 BMW X6 might be polarizing, although we have yet to meet someone who loves it, and it will take that kind of love to fork over the money for one. Although it has excellent cabin electronics and superior handling, it is far from a...